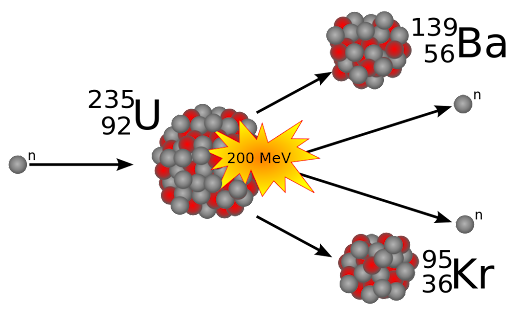 When the spirits and reactor pressure vessels boil over, it is good to know what to bring up (or ignore) in order for your own following to reach a "critical mass". Which physical process takes place in a nuclear power plant? One kilogram of uranium contains two million times more energy than one kilogram of coal. In nuclear power plants, just like in coal-fired power plants, the energy is released as heat. The huge difference in energy density is due to the fact that the chemical energy of coal is used, but the nuclear (Greek nucleus = core) energy of uranium. This energy is released during nuclear fission (also nuclear fission, from the Latin fissio = fission): if the nucleus of a uranium atom is hit by a slow neutron, it absorbs the neutron and, shortly afterwards, decays into two parts (fission products) and two new ones, giving off strong energy Neutrons. These two neutrons can in turn split one uranium atom each, so that four neutrons are produced in the next generatio
Publicar un comentario
Leer más

enero 18, 2021
And not from the book, otherwise it would mean booking. At least that's what the almost eighty-year-old German cabaret artist Dieter Hildebrandt says. We are constantly surrounded by screens of all kinds. One can certainly argue about the social and societal implications of such ubiquitous computing (“omnipresent computing”), but the technical side is undoubtedly fascinating. The machines communicate with us via extravagantly illuminated screens, of which there are many different types. However, experts unanimously agree that the future belongs to only one type of screen: the LED screen. Since its functionality is extremely simple and since the marketing apparatus of the electronics companies have constructed a completely impenetrable forest of terms (e.g. capacitive Super AMOLED touchscreen ), here is a little overview of the subject of displays and screens. We used to have screens with a weight of several centimeters using cathode ray tubes (CRT). Nobody likes these medieval “3
Publicar un comentario
Leer más

enero 18, 2021
As an enlightened citizen of the world, one should know them, the famous seven deadly sins. Not to avoid them, but to swing them as a rhetorical club when necessary. It is particularly impressive, of course, when one can name the Latin technical terms from theology at the same time. Using the example of the seven deadly sins, I will demonstrate how any facts can be ordered and reliably memorized. The technique: route method Time to memorize: a few minutes Applicability of the technology: list-like information of all kinds This oil painting (unchanged image) by Antonello da Messina, an Italian Renaissance painter (15th century), is a randomly chosen location for the route. This route consists of seven route points. Each of these route points will serve as a kind of universal drawer for information to be memorized. Let's learn the route first: Imagine how you walk through the world of the painting along the marked route points. Now go through the route points again, this time withou
Publicar un comentario
Leer más